“StackBlitz is really the development analogy of what Figma has done for design,” co-founder and CEO of StackBlitz Eric Simons told me in an interview. Today, StackBlitz is announcing a new GitHub integration product called Codeflow, along with what Simons says is a “strategic investment from Figma,” which began just weeks before Adobe acquired Figma as part of a $20 billion deal.

StackBlitz is a cloud IDE that aims to provide developers with “instant development experiences”. It features an editor built with Microsoft’s open-source VS Code, but the heart of StackBlitz is proprietary technology called WebContainers, which the company describes as “the first WebAssembly-based operating system.” Introduced last May, WebContainers “allow you to create complete Node.js environments that get started in milliseconds.” The patent for it was just approved by the United States Patent and Trademark Office (USPTO) and issued today, Simons said.

Codeflow, the new product announced today at ViteConf, adds one-click GitHub integration to the StackBlitz IDE. It will allow developers to “create and review pull requests instantly and seamlessly.” As part of this announcement, PR.new allows you to instantly open any GitHub URL in a live environment.

With over 2 million developers using its product, StackBlitz is one of many cloud IDEs vying for position as the tool of choice for browser-based development environments. But unlike Figma in web design, no web tool currently stands out from the crowd, although Simons claims otherwise.

“It actually runs the desktop version of VS Code in your browser. No one has been able to do that before,” he said, adding that StackBlitz achieved this using WebContainers. [projects] made VS Code work in a browser, like vscode.dev [Microsoft’s online IDE, announced last October]but you can’t run extensions, there’s no terminal, etc. So, [StackBlitz] is actually the real deal, entirely in your browser.

Cooking on a multi-burner stove

Even though StackBlitz is a browser-based IDE, Simons says developers still need their local host to store their data and sync with the main repository. Codeflow aims to make this workflow easier for developers.

“The problem on the premises is [that] you have a copy of your repository that you’re working on,” he said, “and usually the devs are working on a feature […] but throughout the week they have a PM [Product Manager] which says, hey, I need you to put an urgent fix. And if they need to, they have to store their changes locally, drop a new branch, install dependencies, blah blah blah, ship it out, and then go back. [to the work on the feature]. It’s a bit like the developers had a single-burner stove they’re working on today. »

According to Simons, Codeflow offers developers a “multi-burner stove” where they can do everything within the StackBlitz environment. 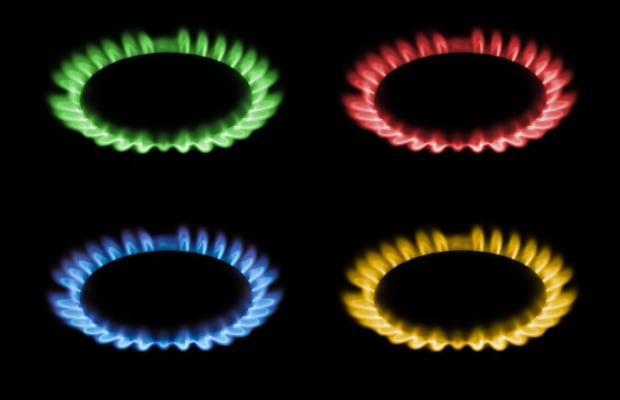 “You still have your main burner where you cook your steak – you know, the big feature you’re working on – but when things happen, you have a quick way in GitHub to instantly spin up an environment, literally immediately.”

Ultimately, what StackBlitz wants to achieve is something very similar to what Figma has done in design: allow development to happen collaboratively, fully online, and in real time. StackBlitz has spent the past few years developing this, Simons said.

“If you look at what happened with Figma, it was the same – Dylan and Evan [the founders] spent years building this renderer before we could build collaboration software around it. It’s the same kind of thing here.

Much like Figma, the goal is to expand its user base beyond the target audience: in the case of StackBlitz, developers. Low-code and no-code product categories have been trending lately, primarily because they provide a way for non-developers to build line-of-business applications. StackBlitz also wants to participate in this.

“StackBlitz won’t just be for developers using an IDE, it’s also a bridge for that kind of low-code or no-code future,” Simons said. “But the primitive key [is] to do this stuff in the browser, with the existing toolchains that exist.

Codeflow will help this progression to low code, says Simons. 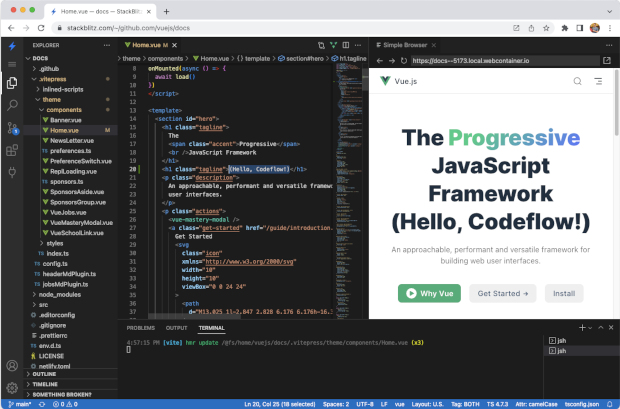 “Codeflow is the dawn of a new era for the company,” he said, noting that it’s currently in beta and will be generally available “sometime in the first quarter” of 2023. He again brought up Figma as a point of comparison. “What they brought to the design [is] other people being involved in the design process, which was not possible before, because the businessman does not need to download Photoshop and have a license to view the design and comment on it, etc

In the case of StackBlitz, he continued, “you can open the link, and an entire operating system starts a full dev toolchain, without any issues consistently, and it’s completely seamless for you, and you can just type in words, and then your marketing site changes. It opens up a pretty wild future where you have people writing actual production code [who] don’t even know how to write production code. So I think there are things like that where, for both developers and non-developers alike, this is going to be a huge boon to collaboration – and productivity software in general.

Using the Web to Improve Localhost

Eric Simons and his co-founder Albert Pai (CTO) have known each other since childhood, and both are also friends with the founding CEO of Figma Dylan Field. Simons told me about a conversation he had with Field on a Caltrain in 2013, when Field told him he was building “Photoshop, but better, in the browser.” As Simons says, he was initially skeptical of Field’s idea – “can you even do this in a browser, would anyone want to use it?” But of course, Field turned out to be right, to the tune of $20 billion worth to Adobe.

It’s clear that Simons wants StackBlitz to do something similar with development IDEs, but he also acknowledges that localhost isn’t going anywhere in the near future.

This is where Codeflow and its multi-burner approach comes in. But from a collaboration perspective, Simons ultimately wants StackBlitz to be a URL where developers (and others) “go there instantly” and they don’t have to think about the complexities of developing apps. “People [will] you just have to naturally start using the browser to do these things,” he said.

Richard MacManus is an editor at The New Stack and writes a weekly column on web and app development trends. Previously, he founded ReadWriteWeb in 2003 and made it one of the most influential technology news sites in the world. Of…